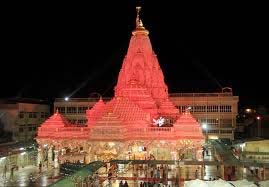 Bhadrapada Ambaji Mela is the name given to the annual fair organized at the revered Ambaji temple in Gujrat. Celebrated on the full moon day in the Hindu month of Bhadrapada, the fair is a multicultural event which is thronged by people belonging to not only the Hindu community but to various other religions and sects. Millions of devotees from different parts of India converge at the Ambaji temple on this day to seek the blessings of goddess Ambaji.

In 2014, the Bhadrapada Ambaji Mela will be organized on 9th September.

Ambaji, one of the oldest and most respected temples across India, is located in the village of the same name in the state of Gujrat. It is one of the 51 Shakti Peeths of India and it is believed that Goddess Ambaji resides here in the form of the Vishwa Yantra. Since the temple is located near the Arasuri Hills, the Goddess is also famous by the name of Arasuri Ambaji. There is a famous legend associated with the temple, which is as follows.

It is said that in order to save the world form the anger of Lord Shiva, Lord Vishnu dismembered the lifeless body of Goddess Sati, which Lord Shiva had been carrying around in his arms. At that time, the heart of the goddess fell on the place where the Ambaji temple is now situated. According to another legend, it is believed that the tonsorial ceremony of Lord Krishna was held in the village where the temple now stands.

Significance and Celebration of Ambaji Mela

The Ambaji Mela holds significance for the farmers in the region as it marks the end of the monsoon season and the beginning of the harvest season. As such the farmers visit the temple on this day to seek the blessings of the deity for a good produce. In addition people also perform various rituals, prayers and special poojas to appease the goddess and seek her blessings for a happy and prosperous life.

Apart from the religious aspects, the fair is also well known for its various cultural aspects. With the people from different religions and sects attending the fair, it is a great place to witness multi-religious harmony. The fair also features a variety of folk dances and cultural events aimed at not only keeping the visitors entertained but also adding to the happiness and fun of the festivities on this special day.