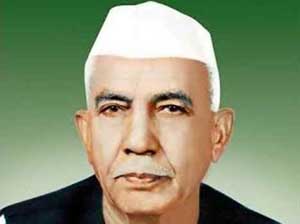 Chaudhary Charan Singh was an Indian politician and the 5th Prime Minister of the Republic of India, serving India from 28 July 1979 until 14 January 1980. He was born on December 23, 1902 in Noorpur village of, town Hapur of Uttar Pradesh in a poor farmer's family.

In Feb 1937, Ch. Charan Singh was elected to the Legislative Assembly of Uttar Pradesh (United Provinces) from Chhaprouli (Baghpat) constituency. In 1938, he introduced an Agricultural Produce Market Bill in the Assembly, which was planned to give the protection of the interests of the farmers against the rapacity of the  traders.

He was an active campaigner of the Satyagraha movement. His idol was Mahatma Gandhi throughout his life and went to jail many times in the freedom struggle of India. Chaudhary Charan Singh passed away on 29 May in 1987. On the day of the Ch. Charan Singh Death Anniversary, people remember him with great respect.

Chaudhary Charan Singh became visible on the national stage since 1959, when he had the strength of conviction to publicly clash with the unquestioned leader and Prime Minister Pandit Jawaharlal Nehru's socialistic and communist land policies in the Nagpur Congress Session. Charan Singh was credited with being an effective Prime Minister capable of taking care of the needs of the people.

Being a son of a farmer, he opined that the right of ownership was essential to the farmer in remaining a cultivator. His political career suffered due to his open criticism of Jawaharlal Nehru’s economic policies. Chaudhary Charan Singh left Congress in 1967 and formed his independent party called Bharatiya Lok Dal. Ch. Charan Singh had served twice as Chief Minister of Uttar Pradesh.

The speech of Chaudhary Charan Singh to the nation on 15 August 1979 was very prophetic in which he found the nuclear ambition of Pakistan as a huge risk to the Nation. He also stated that Indian labour laws had to be polished if India were to become competent in the world economy. He was a skilled writer and has written several books. Some of them are:

Several reforms were brought by him during his inspiring political stint for the maximum benefits of the poor farmers. Ch. Charan Singh’s memorial in New Delhi was named as Kisan Ghat because of his strong association with the farming communities of India.