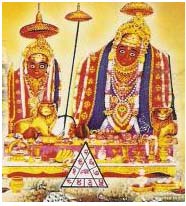 The Kaila Devi festival takes place in the honour of Goddess Kaila Devi and lasts for a fortnight. Goddess Kaila Devi is considered an incarnation (avatar) of the Mata Laksmi, the goddess of wealth, fortune and prosperity. The famous Kaila Devi fair in Rajasthan is held during the Krishna Paksh of 'Chaitra' Maas (month) as per the Hindu calendar and runs throughout the most venerated fairs of Rajasthan, Kaila Devi fair is held at the Kaila Devi temple, who is worshipped as the guardian deity by the Khinchis, the Yadavas present in large numbers in Karauli. The annual fair of Kaila Devi, (Mahalakshmi), is held annually at the village Kaila (24 kms to the south west) in Karauli district. The Kaila Devi temple is situated on the bank of the Kalisil river in the hills of Trikut, north-west of Kaila village. In the temple yard, there is a small temple of Bhairon and a shrine facing the Mata Kaila Devi's temple houses Lord 'Hanuman', called 'Languriya' in the local language.

Kela Devi is also called Kalia Mata. Previously, the village was named Kalia after a Sadhu (sage) called Kedar Giri, who lived on the bank of the Kali Sil River. Thousands of believers from all the communities visit the Kaila Devi temple every year. The Kaila Devi Fair attracts a lot of pilgrims from Madhya Pradesh, Uttar Pradesh, Delhi, Haryana and Punjab too. More than 2 lakh pilgrims visit the Kaila village during the Kailadevi Fair. The traditional dances and singing of Rajasthani tribal men of Mina community makes the atmosphere sparkling and lively.

The devotees offer kumkum, new clothes, coconuts, kajal (kohl), tikki (vermilion), sweets, fruits and bangles to the Kalia Mata which they bring along with them. Devotees participate in the rituals associated with the worship of Mata Kaila Devi. One of the interesting rituals is the Kanak Dandoti ritual that reflects the followers lying on their back draws lines with their hands and then travells up to the drawn line. They cover a distance of 15-20 km in the similar way. Some of the Kaila Devi devotees even refuse to take any food or water during their journey till the time they reach the place. This ritual is specifically followed by believers of a staunch devotee of Kaila Devi (Goddess of Wealth) named Goli Bhagat.