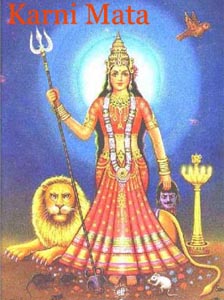 The Fair of  Karni Mata is held twice in a year during the time of the navratras for ten days, this year the celebrations took place in March. The fair takes place in Deshnok, which is located in the Bikaner, a beautiful and a famous city of Rajasthan. The next celebrations will take place in the month of September or October. The fair marks the celebration of Karni Mata who is considered a Goddess by the people of Rajasthan. People gather at Bikaner from all over the state and the country to take blessings of Mata Karni during the time of the fair.

According to history, Karni Mata was woman who led an ascetic life and dedicated her entire life in the service of the poor and less fortunate. It is believed that Karni Mata possessed superpowers. She is worshipped by the Royal family of Bikaner as the benefactor deity. Her followers are called “Charans”. In the custom of the Rajputs, it is not only customary but also considered auspicious to bring their child to the temple for the Karni Mata’s blessing when the child’s head is shaved for the first time.

The fair held in March was the bigger one of the two held in the year. Devotees reach the temple as early as 4 am when the temple gates are opened for them to worship. The temple of  Karni Mata is also called the rat temple as the temple has a large number of rats roaming around. Most of these rats are common brown rats but it is believed that spotting a white rat is considered auspicious and a good omen. Rats are fed by the devotees and it is also considered auspicious if rats run over the feet of the devotees. The rats are worshipped at the temple and as the legend goes, it is believed that Karni Mata brought back one of her children back from the dead in the form of a mouse.

The temple is made of marble with a 75 cm long statue of the Goddess made of yellow marble.  During the fair the temple not only sees the presence of the devotees from all over the place but also the presence of the royal family that holds Karni Mata to be their benefactor deity. This fair gives a perfect end and a perfect celebration to the navratras.