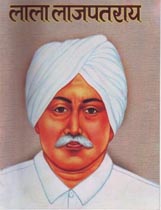 Lala Lajpat was born in Dhudike in Punjab district. He was a prominent leader. Though he belongs to Hindu family, he had great respect for Muslims. He had even fasted and prayed like Muslims, but did not embrace Islam. He also founded the popular Hindu Orphan Relief Movement in order to keep the missions of Christian.
He joined the Lahore Government College for studying law. At the college he managed to come close to Pandit Guru and Swami Daya who further become the three friends who joined the well known Arya Samaj.  Swami Daya Nand Saraswati founded Arya Samaj. Besides practicing law, he worked for collecting funds for Dayand College and also attended various Congress movements for the freedom of India. Further, he got elected as the member of Hissar municipality in the role of secretary. He was the prominent member of Hindu Nationalist. He also contributed for Bal-Pal trio. Other two members of the team of Bal-Pal trio were Bipin Chandra Pal and Bal Gangadhar Tilak. These three members formed extreme faction for the Indian National Congress.
Lala ji believed that it is important to form a reliable and powerful propaganda in order to explain the foreigners to stay away from the country. He gave the utmost importance to the freedom of Indian movement. His involvement results in the independence of India. He was among the true freedom fighter. He visited various people and place among the entire world.
The Simon commission was formed which was headed by the John Simon, who came to visit Lahore. Lala ji with other freedom fighter opposed this commission. This commission was for India, and there was not a single person who belongs to Indian community. This was the main reason Lala ji do not wanted to visit people and headed this protest. The British ordered for Lathi charge on the people in which Lala ji was seriously injured and then passed away on the 17th   day of November 1928.

Lala Lajpat Rai Jayanti is celebrated in all parts of country with great pride. In schools, colleges and other education institutions, there are many functions organized. People are awarded by prizes for all academic years. In many educational institutions, there are speeches and lectures in order to educate new generation about the freedom fighter of India.