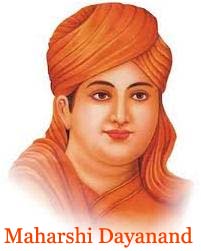 There are great people who have made their countries proud. And then there are those exceptional people who have lived such extraordinary lives that the entire human race has been made proud by their existence. Mararshi Dayanand Saraswati is one such individual who though born Hindu and though had dedicated his life for the reforms and betterment of the Hindu society, will always be remembered as a humanitarian. Someone who, even in the late nineteenth century India, believed in the equality of all and completely refused caste and sex based discrimination in the society.

Life and work of Maharshi

In his lifetime of 59 years Maharshi Dayanand Saraswati fought against any and every system in the Hindu society which was oppressive as well as dogmatic. For instance, he believed the existence of a single God, the Almighty or the Paramatma, and preached accordingly. He fiercely demanded for the removal of child marriage and fought against the discrimination of people based on their caste. To make his movement strong and to bring people of the same mind-set together he established the AryaSamaj in the year 1875 in Bombay, present Mumbai in India.

Celebration of this day

Although a non-reserved holiday, this day is celebrated by many mostly in the western parts of India. The celebration basically consists of the commemoration of this great individual who had once led the journey of the country towards modernism and liberal thinking. Shlokas from the four Vedas: Rig, Sama, Yajur and Atharva are chanted and revised in some Hindu families as per the wish of Maharshi Dayanand, whereas communities hold cultural programmes in various scales in different parts of not just the country but the world. The date of the Jayanti varies every year depending on the Hindu calendar. In the year 2013 the Jayanti will be held on 7th March.

Significance of this day on the lives of masses