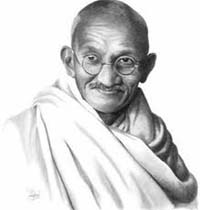 Mahatma Gandhi's Martyrdom – Death Anniversary of Nation’s Father
Martyrdom is celebrated in the memory of all brave people. 30th January is marked as Mahatma Gandhi’s Martyrdom. He is called as the father of the nation who fought his entire life for the independence of India. He was assassinated on 30th January in the year 1948 by Nathuram Godse. It is said that Godse though that the participation of India was due to Gandhiji and this was the main reason he shot Gandhi. For this deed, Godse was hanged on 15th November, 1949.

Gandhiji was passing along the crowd after the prayer congregation. When he took off his hand to acknowledge the prayer congregation, suddenly a many came towards him as if he was about to touch Gandhiji’s feet. He was none other than Godse. He successfully shot three points on Gandhiji. The last words chanted by Gandhi were “Hey Ram”. The white clothes were turned with red bloodshed; the hands which were raised for prayers congregation slowly come down. Gandhiji breathed at the moment for the last time. The crowd got vulnerable. The police attendant at the even caught Godse immediately. Godse was even reluctant as he thought that he did something great for his evil deed.

In the Memory of Martyrdom

On this day, the President, Prime minister and all important people of the Indian constitution gathered in New Delhi Maidan. In addition to these, even the armed forces gathered at the maidan to salute this bravery man by performing some cultural program. To witness this people from all over the world join this event. A 10 minutes silence is been observed in the memory of all brave martyrs who found for the country. This event is triumphant by showcasing some of the good memories from the past about the soldiers and their life.

On this day, celebrations are done by keeping everything in mind. All Indians are expected to keep a silence for 2 minutes in the name of brave soldiers. After the silence, in many educational institutions, there are several competitions and programs been held. All religious and multi faith prayers are been arranged in respect of these brave soldiers. Classical music and bhajans are been organized by the state, national and government bodies. Devotional songs are been played by keeping in mind that it won’t hurt any religious group. The entire nation celebrates this festival.