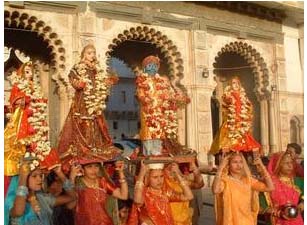 Mewar Festival is a major festival of Rajasthan and is famous for its liveliness. Mewar Festival is celebrated annually in Udaipur, Rajasthan to welcome the arrival of spring season with lots of joy and happiness. It is the second World Living Heritage Festival of the India and the spirit of the celebration can be seen throughout the state. Since Udaipur city has been the governing place of the Mewar rulers, you can see its exact flavour especially in this city. People in several parts of Udaipur actively take part in this festival. Mewar Festival is of great importance both religiously and culturally.

Udaipur famous as the city of lakes is a developed city in Rajasthan. The entire city is beautifully decorated with bright lights and decorations during this celebration. This is the special day when the women flaunt their traditional costumes and jewellery. This festival is a visual feast with traditional Rajasthani dances, songs, camel processions, traditional devotional music, and firework displays.

The history of Mewar celebration dates back to time when this part was ruled by the Sisodia dynasty. History says, The King of Udaipur, Maharaja Udai Singh met a holy man while hunting. This holy man was meditating on a hill that was providing a wide view of Lake Pichola. The man blessed the king and instructed him to build a palace at the place near Lake Pichola. The king agreed to his suggestion and built the palace and founded the city.

Women gather to dress the Idols of Isar (Lord Shiva) and Gangaur (Goddess Parvati) to perform the ritual. After dressing and clothing the idols of Deities, local people carry them in a procession passing through diverse parts of the city. At the end, the traditional procession makes its move at Pichola Lake towards the Gangaur Ghat. At this point, the statues are transported into decorated boats and immersed into the deep waters of the Pichola Lake.

Local people as well as visitors engage into a variety of dances, songs and other cultural events illuminating the culture of state. Mewar festival spreads a feel of pleasure and commitment all over the place and people enjoy this festival with enthusiasm. This bright and colourful festival fascinates tourists from all over of India. The grand celebrations of the Mewar Festival of Rajasthan is concluded with a sparkling show of fireworks that light up the sky.