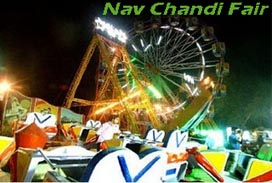 History of the Nav Chandi Fair
According to a myth, it is believed that Mandodari, the wife of Ravana was deeply devoted towards Goddess Chandi and in order to honour her, she built a temple at her birthplace, Meerut. Ever since that time, this festival is being celebrated by the residents of this place religiously and with true devotion. Other than this, whenever there is a mention about this fair, there is always a mention of the 10 great learning’s that are related to Goddess Parvati or Shakti.
Nav Chandi Fair Date:

Nav Chandi Fair Date 2018- In the month of March, to be announced

Nav Chandi Fair Date 2019- In the month of March, to be announced

Nav Chandi Fair Date 2020- In the month of March, to be announced

Nav Chandi Fair Date 2021- In the month of March, to be announced

Nav Chandi Fair Date 2022- In the month of March, to be announced

According to the Hindu Mythology, the father of Sati, King Daksh Prajapati invited all other kings and sages to a yagna accept his own son- in- law, Lord Shiva. Hearing this, Sati gets very angry and she seeks for the permission to go there from Lord Shiva, but he refuses because they were not officially invited. She gets really very angry and takes the form of dark energy. Lord Shiva tried to escape from such a fury and in order to stop him from running in all the 10 directions, she took ten forms. These different forms are Bhuvaneshvarti,  Baglamukhi, Chinnamastaa, Dhumavati, Kali, Kamala, Tripura Bhairavi, Shodashi. Matangi and Tara. The ten different types of form that Mother Parvati took are known as the real powers of Lord Shiva.

Synopsis of Nav Chandi Fair
This festival is conducted in a huge place and not only the traders from Uttar Pradesh and neighbouring states visit this fair, in fact all the cattle traders from  the states of the country are invited to the festival. People who own a business that is related to cattle, definitely make a visit in this fair as one can find some of the best cattle here. Some of the people make a good bargain and they purchase some of the healthiest animals. There is a feeling of joy and happiness on the faces of the cattle owners on this eve. Other than the cattle stalls there are some other stalls too, that feature traditional handicrafts of different types.