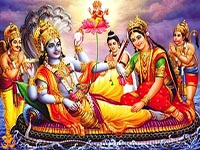 Paap means ‘sin’ & Mochani means ‘to escape’. Therefore, we can say that the day of this Ekadashi is followed to eliminate sins of a person’s life. Papamocani Ekadasi, or Papamochini Ekadashi, is celebrated during Krishna Paksha (dark fortnight) of Chaitra month, according to the North Indian calendar and Krishna Paksha of Falgun month according to the South Indian calendar. It is believed that observing this Ekadasi helps in the redemption of sins. Ekadasi fasting is dedicated to Lord Vishnu.

The significance of this Ekadashi was mentioned in the Bhavishyottara Purana. Legend says that once an Apasara from heaven named Manju Ghosha lured Sage Medhavi into married life. After some years, the Apasara wanted to return back to Heaven (Devalok) but this was opposed by the Sage Medhavi. Later, in anger, the Sage cursed the Apsara that she will turn into a witch. However, after being prayed, Sage Medhavi told her that she will be released from the curse only by observing Papamochini Ekadashi fast.

The Sage Medhavi too felt that he too had committed sin and he also decided to observe this fast (vrat). Thus Papamochini Ekadashi exclusively helps in removing sins and guiltiness associated with the sins committed. All the normal rules as well as rituals associated with the Ekadasi vrat are observed during Papamochini Ekadasi. According to Hindu culture, Parana means breaking the fast. Papamocani Ekadashi Parana is done after sunrise on the next day of vrat (fast). It is necessary to break the fast within Dwadashi Tithi. Not doing Parana within Dwadashi is similar to a wrongdoing. The most preferred time to do Parana is Pratahkal. One should avoid doing Parana during Madhyahna. If due to some reasons, one is unable to break the vrat during Pratahkal, then only one should break the fast after Madhyahna.