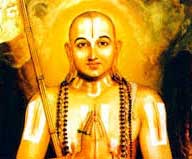 Ramanuja Acharya Jayanti (birthday) is celebrated as the birth anniversary of Ramanuja, a South Indian Philosopher and native of Tamil Nadu. Generally, Ramanuja Acharya Jayanti falls on Chaitra Month of Hindu Calendar and it falls on Thiruvathirai Nakshatra. His birth name was Ilaya Perumal and he is well-admired for his contribution to spread the light of vision throughout his life.

His philosophical foundations for devotion were influential in the Bhakti movement. Ramanuja, amalgamated the philosophies of the Brahmasutras and the Upanishads. He was the most knowledgeable Acharya who also advocated the ethics of Vaishnavism.

It was Ramanuja who advocated that devotional worship and prayer of Lord Vishnu is the ideal path to achieve salvation (moksha). He was also recognized as a famous preacher who guided the devotees on the path of Nirvana and helped them even to attain Nirvana. His works was held great importance and even today his works are consulted by the famous scholars, whenever the need arises.

The major philosophical works of Ramanuja, are the Bhagavad Gita Bhasya (explanation on the Bhagavad Gita), the Vedartha Samgraha (explanation on the Vedas) and the Sri Bhasya (commentary on the Brahmasutras). As his contribution is in the making of several Upanishads, reciting same on Ramanuja Acharya Jayanti has been considered auspicious. In Tamil Nadu, people go to the shrines for offering their prayers to Lord Vishnu and organize religious activities in their houses.