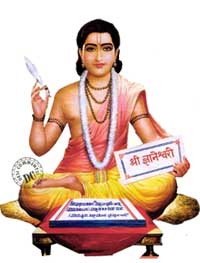 Saint Gyaneshwar Jayanti is celebrated in honour of the famous and legendary Saint Gyaneshwar. Saint Gyaneshwar was the renowned saint in Northern India and was known for his intellectual qualities. He was famous for his extraordinary talent in terms of writing as well as other field of knowledge.

Saint Gyaneshwar preaches influential facts to people so that they could understand the difference between bad and good. According to the historical records, it is believed that Saint Gyaneshwar was born in 1271 and he became one of the iconic figures and social reformers in the Indian religion system.

Saint Gyaneshwar acquired huge knowledge because he joined various religious gatherings. These attending had a great impact upon him and he began to understand Hinduism better. The most famous literary works done by the most famous Saint Gyaneshwar are known as Amritanumbhava and Gyaneshwari. Gyaneshwari is a book based on Bhagwat Gita that reveals the essential details and fact of life. It depicts the philosophy and values of life in detail.

The other book, Amritanumbhava, could be considered as a joint biography of various popular saints for whom he is regarded as the spiritual leader. Perhaps, these books are held in high esteem by the complete Hindu community as they find these literary works very close to their lives and could linked themselves in day-to- day events. Learning about good facts and personality development is best possible when one goes through every chapter of the books in detail.

Celebrations related to Saint Gyameshwar Jayanti are mostly celebrated to the northern part of the India, mainly in the states Madhya Pradesh and Maharashtra. In this special event, people wake up early in the morning and take a bath and visit temples for offering their prayers. On the other hand, at several places, Bhajan, Satsang and Keertan are organized and literary writings of Saint Gyaneshwar is chanted.

Even at various places, a cultural events, which depict the life of this knowledgeable person are performed with great devoutness, reverence and devotion. At the end of the day, people are given the Prasad (Holy offering).A Satsang is also conducted, followed by few Bhajans and Keertans.