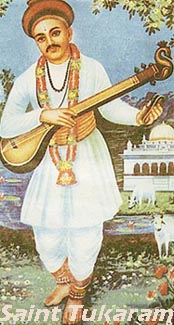 Saint Tukaram Jayanti is observed and celebrated on second day of waning phase of Falgun month every year, as per Marathi Calender. It is believed that Sant Tukaram abode to heaven on that day. He was an eminent person in the field of Marathi language and poetry. He lived from 1608 to 1649. He contributed great efforts to the Marathi language. His enormous support and spiritual songs and poetry to Marathi are memorable. Just like we compare English literature contribution for Shakespeare, similarly Sant Tukaram has contributed for Marathi literature.

Sant Tukaram was born in a small village name Dehu located near Pune region. He dedicated his entire life so that he can attain the Moksha. It is believed that he reside near the Lord Vithoba’s temple. Tukaram’s ancestor used to follow Lord Vithoba. He belongs to Kshatriya family. The family was more in to farm land and entire money was involved in business. Unfortunately, Sant Tukaram suffered huge loss in the business. This is where he decided to dedicate all his life away from the cruel world. He dedicated his life to God in order to understand His power and stories. One day, Lord Vithoba appears in his dream and gave him the right path to devote his entire life in the name of God.

Sant Tukaram has written more than 4500 Gatha, also known as Bhangs that reflects his contributions and dedication towards Marathi culture. The famous poems from his collections are Janabai, Namdev and Eknath. All these poems are written in archaic Marathi language. Sant Tukaram’s poems and bhangs truly depict the love and emotions towards God. He was influenced by the lives of Sants, Puranas and was true admirer of Pandharpur. He used to wear simple traditional clothes. He refused to wear any kind of jewellery. He used to believe that the true belief in God lies in the simplicity and not in orthodox or any kind of ritual feelings. His poems are also considered in the Guru Granth Sahib.

Sant Tukaram Jayanti is celebrated in many parts of Maharashtra especially in small villages near Pune. It is the birth day of this legend, religious poet, religious follower and devotional singer. People from various walks of life especially who think literature is their best friend, celebrate his Jayanti on large scale. Many people visit Lord Vithoba’s temple to offer prayers. At many places programs are organized to educate Sant Tukaram’s preaching.