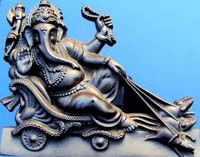 Sankata chaturthi, also known as Sankashti Chaturthi and Sankatahara chaturthi , is a day-long Vrat, which is observed to please Lord Ganesha. It is believed that Lord Ganesha is Vighna Harta (Remover of hurdles) and helps in getting rid of dangers. That is why people worship Lord  Vighnavinayaka.

When Chaturthi falls in the Krishna Paksha i.e. dark phase of Bhadrapada month of Hindu calendar, it is called Sankata Chaturthi.

It is believed that there are around 360 kinds of energies or frequencies, being radiated from Earth. Especially on the dark fortnight, these frequencies become highly active in nature, which may result in various dangers, disturbing normal functioning of our mind and body.

Sankata Chaturthi Vrat is observed to seek protection from Lord Ganesha, who is believed to control these frequencies. Ganeshji frees human beings from such dangers. This Vrat or fast sets us free of all the disturbances and distress, caused by these frequencies.

People observe day-long or partial fasts on the fourth day after Poornima or full moon. In full day fast, people do not eat anything until sighting moon whereas, in partial day fast, people eat Falaahar – which literally means diet of fruits, but in practice it means Satvic Food- such as Sabu Daana (soap seeds) Khichdi, fruits and curd rice etc. The Vrat is also said to eliminate difficulties from life.
The fast starts right in the morning, after taking bath. The fast is broken and Ganesh Puja is performed in the evening after sighting the moon.  When moon is sighted, moon should be worshipped by sprinkling water, containing sandalwood paste, flowers and uncooked rice, in the direction of Moon. If, at all moon is not sighted, Sankashti chaturthi Puja is done as per the time of moonrise mentioned in Panchang or Hindu calendar. As per the rituals, Lord Ganesha’s idol, picture or painting should be decorated well with the help of flowers and Durva grass. One earthen lamp should be lit with ghee. Fruits such as banana and one coconut (must) and flowers are offered to Ganeshji along with prayers. Any Puja of Ganeshji is considered to be complete only when Laddoos (specific spherical sweets) are offered to Him. Lord Ganesha is offered Modak or Laddoo along with other offerings and after Puja, they are distributed as Prasad.
Aarti (hymns) such as Ganesha Aarti and Ganesha Stotram are chanted in the praise of Lord Ganesha. Some mantras are also chanted during this Puja. These include Sankashtnashana Ganesha stotram, Ganesha Ashtothara, and Vakrathunda mahakaya or any other mantra dedicated to Lord Ganesha. By reciting these mantras, one seeks blessings of Lord Ganesha.

Sankata Chaturthi is celebrated on a large scale in western and southern India, particularly in Brahmin community. They follow a strict falaahar diet and perform Puja with faith and respect for Lord Ganesha.  Even in Ganesha temples, SankataChaturthi brings a lot of vigour. People from all walks of life go to temples for Ganesha Darshan (a look of Ganesha). They queue up with offerings and immense faith. A divine and spiritual sentiment is evident at religious places on this very day.