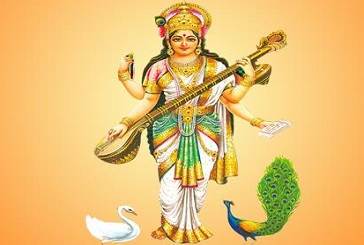 The three forms help the trinity of Lord Brahma, Lord Vishnu and Lord Mahesh (Shiva) to create, maintain and regenerate the Universe respectively. The Saraswati Avahan is observed during the favourable muhurat of Mula Nakshatra. People also observe a fast on Saraswati Avahan Festival.

Saraswati in Sanskrit is a composite word of surasa-vati (सुरस-वति) which means "one with plentiful of water" Saraswati is celebrated as a Goddess with healing, purifying powers of abundance, flowing waters connotes a river deity. She is known by different names like  ‘Mahavidya Nila Saraswati’, ‘Sharada’, ‘Vidyadayini’, ‘Veenapani’, ‘Sharadamba’, or even ‘Pustaka Dharini’. In Book 2, Rigveda Maa Saraswati is mentioned as the best of mothers, of rivers, of goddesses.

For the Avahan of Maa Saraswati special vedic mantra is recited to get her blessings. In this mantra, Maa Saraswati is praised and the worshipper seek her guidance and protection. Usually the last three days of Navratri or Durga Puja is dedicated to worship Maa Saraswati. The practice of Saraswati Avahan Vidhi is observed on the ‘Mahasaptami’ (seventh day) during the Shukla Paksha (the waxing phase of moon) in ‘Ashwin’ month. In the holy Hindu texts, the times for worshipping Maa Saraswati are explicitly mentioned.