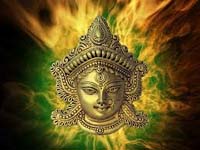 Shakambari Devi Jayanti concludes the nine-day festival of Shakambari Navratri. It is celebrated on Paush Poornima.

Devi Mahatmya explains that once a draught of hundreds of years destroyed everything. Everything was dead, land barren. There was nothing to survive upon. Animals too had started dying. Then, many saints offered prayers to Goddess Durga. The goddess listened to their prayers and appeared in the incarnation of Shakambari Mata and brought forth fruits, vegetables and herbs from her own body to end the sufferings of people. She blessed the Earth with rain, and finally years of suffering, starvation was over and renewed life was bestowed upon earth.  Since then many people in various regions of India celebrate Shakambari Jayanti.
There are many temples dedicated to Goddess Shakambari. Some of them are located in Karnataka, Maharashtra, Uttar Pradesh, and Rajasthan. In Karnataka and other parts of southern India, Shakambari Mata is known as Goddess Banashankari.

The festival is celebrated mainly in Madhya Pradesh, Rajasthan, Himachal Pradesh, Karnataka and Tamil Nadu. It is celebrated on a grand scale at Shakambaripuram Sakambari temple located in Chennai. People observe nine-day festival at the time of Paush Navratri that starts from eight day of Paush month (Paush Shukla Ashtami)till Paush Masam Poornima, the day when Shakambari Devi Jayanti is celebrated.