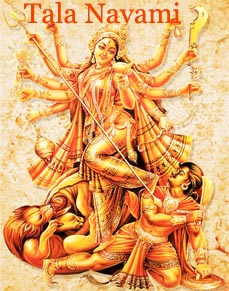 In 2015, Tala Navmi will be celebrated on 3rd September.

Significance of Tala Navmi
Tala Navmi is a festival dedicated to Goddess Durga and on this day special prayers are offered to appease the deity. The day holds special significance for married women, who observe a fast on this day, and break it only after seeing the moon. The festival also marks the beginning of the Durga puja festival in Eastern India, which is celebrated only a month after this day.

The festival is considered auspicious for seeking blessings for the fulfillment of desires and wishes from Goddess Durga. It is quite common for Sadhus to perform yajna and homas on this day. Many yatras and fairs are also organized on this day as a part of the festivities. In addition devotees also organize jagrans and kathas on this day.

Tala Navmi Celebrations
Although Tala Navmi is not a very popular festival and its celebration is restricted to only some regions of India, it is celebrated just like any other major festival with great devotion and fervor. On this day, it is considered auspicious for men who have lost their wives to feed Brahmins by offering them dry food and various other things. It is also a custom for such men to feed married women.

The temples of Goddess Durga are especially crowded on this day as numerous people visit these temples to offer prayers to the Goddess and seek her blessing for happiness, success and prosperity.