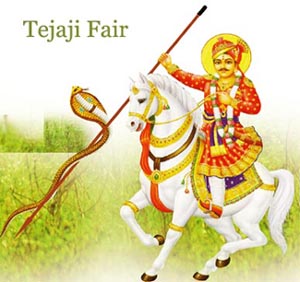 Tejaji Fair
The festival of Tejaji fair is celebrated in Rajasthan in the memory of Veer Tejaji, a folk deity held in high regard by the local people. The annual event is celebrated on the 11th day of the bright fortnight of the Bhadrapada month of Hindu calendar. On this day grand fairs are organized in various parts of the state which are attended by people, especially those from the rural areas in large numbers.

In 2014, the Tejaji Fair will be organized on 14th September.

About Veer Tejaji
Tejaji is amongst the most famous folk heroes of Rajasthan and is worshipped as a folk deity by the people of all casts and communities. It is said that his life was full of many heroic events and that he was a man of word, who sacrificed his own life to save the pride and values of his family. The legend of his life perfectly exemplifies his bravery as well as his will to serve and protect others even at great risk to his own well being.

It is said that Tejaji was married in childhood but was unaware of the fact because of a dispute that created animosity between his family and his wife’s family soon after the marriage. However, when he learned the truth as a young man, he went to get his wife back and was killed while returning home. It is believed that although Tejaji was able to vanquish all his enemies during the journey, he sacrificed his life to keep his promise to a snake after, who had wanted to bite him before the war with his wife’s clan. However, Tejaji convinced the snake to let him go at that time and promised to return after the battle. When Tejaji returned, the snake bit him on the tongue as there was no unwounded place to bite of the latter’s body, and this instantly killed Veer Tejaji.

Significance of Tejaji Fair
The people of Rajasthan also believe Tejaji to be a great saint and the state has numerous temples in his name.  It is said that he can protect and cure people suffering from the bites of snakes and other venomous animals.

Different rituals are witnessed at the various fairs organized to mark the birth celebrations of Tejaji. Apart from being a place to witness social harmony, the fairs also present great trading opportunities to craftsmen and are also considered to be great markets for buying and selling cattle.