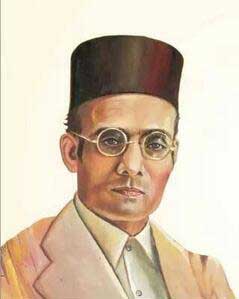 Vinayak Damodar Savarkar (28 May 1883 – 26 Feb 1966) was also famous as Swatantrya veer Savarkar. He was an Indian pro-independence activist, popular politician as well as a writer, poet and playwright. Born in Bhagur in Nashik, Veer Savarkar was a great Marathi Legend and he advocated dismantling the caste system in Hindu culture, and reconversion of the converted Hindus back to Hinduism.

His political philosophy had the components of rationalism and positivism, utilitarianism, humanism and realism. His birthday celebration is organized every year on 28 May, 2016. Several programmes are also organized across Maharashtra to honour him in a grand manner. Veer Savarkar received the biggest jolt of his life after British authorities banned The Indian War of Independence (his patriotic publication), which was based on the Indian revolt of 1857 under the leadership of Mangal Pandey.

On the day of Veer Savarkar Jayanti, people of all sects come together to pay their due respects to him. Veer Savarkar is considered as the greatest sons of Mother India. Vinayak Damodar Savarkar was considered as an extremist by the British rulers. After serving as the Hindu Mahasabha President, Veer Savarkar became even aggressive with his Hinduism ideology. He encouraged for future India as Hindu Rashtra (Nation).

Hindu Mahasabha activists distribute sweets among the poor people on the day of Veer Savarkar Jayanti by remembering their former president. Various other cultural programs and social development activities are also organized on the same day as a sign of commitment towards his philosophy