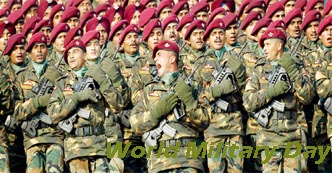 World Military Day is observed by numerous countries in honor of the respective military forces. It is the day when the general mass and the future representatives of the world are reminded of the defense administrations and the true heroes of the respective countries. Protection of a nation against any intruder is vital. The armed men and women are always ready to do so for any nation.

World Military Day Date: 21 March
About Military Forces
Military forces, also known as armed forces, or defense forces, consist of the trained, armed and brave professionals. It is mostly seen that these professionals have families at home, but without any communication whatsoever. It is the matter of sacrifice for the country, where every step or second can be the last for their lives. Also, they are well trained to cover up for the burdens of situations like no food or medical help for days. These professionals are thus regarded as the true heroes of the respective countries.
Military forces go with the term patriotism, which make the World Military Day more special. These forces can be of different types, such as air forces or navy and so on. It is so as the attack of the intruders can hit a country through any route. Though the society has become more civilized than before, the aspect of war is still one of the issues. The military forces are responsible to keep things under control and provide peace to the countrymen as much as possible.
Military forces also concern a lot of investments from the subjective government bodies. This is because of the improvement of technology. The weapons and the transport arrangements for the battles are nowadays highly equipped in advanced features. These help in bringing out the expected results while in wars. Special professionals are also hired for making strategies so that the military forces can stand against even the fieriest enemies or intruders.

Celebrating World Military Day
The celebration of World Military Day includes different kinds of activities and amusements. Not just the speeches from the army specialists, but also the army men take long awaited break from their jobs and become parts of the amusements. This is also one of the days where they get to meet their families and socialize. On the whole, the celebration of the special day brings a lot of joy in the world, where people get to understand the difference between war and peace.