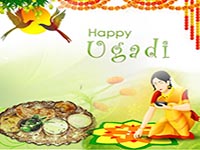 Yugadi (Ugadi and Gudi Padwa) is the beginning of the New Year for the people of Telegu and Kannada communities. The Saka calendar begins with the Chaitra month (March–April) the first month in Panchanga according to the Indian calendar. Ugadi marks the first day of the new year for Kannada and Telegu folks. In some parts of India it is known as Bhartiya Nav Varsh or Vikram Samvat. This holiday is mostly prevalent in Telangana, Andhra Pradesh, Karnataka, Goa and Maharashtra. Gudi Padwa, which is the New Year for Marathi, is also celebrated on the same day.

The term Ugadi is originated from the Sanskrit word “Yugadi” that means ‘initial time of a new Yuga or period’. This traditional and auspicious festival is usually celebrated by Kannada and Telegu folks in the mid-March or in early April. People from all over Karnataka and Andhra Pradesh celebrate this festival with gaiety and much enthusiasm.  Ugadi Festival is also the most favourable time to start new ventures.

Festivals observed on the same day:

The day begins with ritual oil-bath. Eating Neem leaves and Oil bath are the common rituals of Ugadi festival. People perform the ritualistic worship to seek the blessings of Gods. They pray for their good health, wealth, prosperity and success in personal and professional life. In Karnataka a special dish called Holige or Obbattu, is also prepared. It consists of a filling (gram and jaggery) stuffed in a roti-like bread. It is eaten with ghee or milk topping or coconut milk.

In Andhra Pradesh, a special dish called Bobbattu is prepared on this occasion. The special dish called Bhakshalu is also prepared in Telangana. Another dish which is prepared for Ugadi is Ugadi pachhadi. It is a mixture of 6 different tastes sour, salt, sweet, pungent, bitter and spice. Different taste signifies a mixture of sadness, anger, happiness, disgust, surprise and fear.