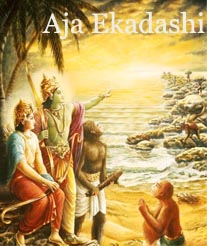 Aja Ekadahi is dedicated to Lord Vishnu and is considered as one of the most important fasting day in Hindus. The word “Ekadashi” means eleven is a Sanskrit term. This day falls on the 11th day of every fortnight according to Hindu Lunar Calendar. This day occurs during the Shukla Phase (waxing phase of the moon) and the other Krishna Paksha (wanning phase of the moon). As per Hindu myths, this fasting should be followed on strict rules. The day prior to the Ekadashi before sunset until sunrise on the day after Ekadashi, lasting the fasting duration to 48 hours in total.

This fasting day is mentioned in numerous Puranas. It is also called as “Hari Din” or “Harivasara”. This auspicious day is also mentioned in the Skanda Purana and Padma Purana. It is believed that most of Vaishnava followers follow this fasting in adhering manner. All Vishnu followers keep a strict fast keeping themselves away from beans, grains, cereals and certain spices and vegetables. This fasting day varies according to different regions. Preparations for the Aja Ekadashi  begin on the Dasami day, a day before Ekadashi. Followers  who intend to observe this fast wake up early in the morning on Dasami and take a ritual bath. They also perform the other daily routines required to deliver the pujas or prayers to Vishnues. On this day, they take up only a single meal and keep away from salt. Most of the devotes preferred having fresh fruits and dried fruits. Some of them prefer to eat milk products. People in the western parts of India eat Sabudana Khichadi that includes peanuts and potatoes. In addition to this, people avoid eating non-vegetarian, alcohol and sex during this fast. To complete the fast in a ritual manner, people eat deal with honey on Dasami day. The entire day is spent by worshipping Lord Vishnu during Aja Ekadashi.

After Aja Ekadashi, the next day is called as Dwadashi. The same routine is followed as on Dasami. After taking a bath, the devotees offer prayers and Pujas to Lord Vishnu. The fast is broken with the dal and honey. Some preferred to break the fast with the food eaten on Dasami. There are no specific rules for this fasting day. Every religion has their own importance of keeping this fast.

It is good to go on fast once in a while as it recuperates the body. Aja Ekadashi observance cleans the body and the digestive organs.