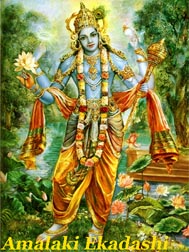 Amalaki Ekadashi is a holy day for the Hindus, celebrated by almost all communities of the concerned religion. It is the festival, which is celebrated on the 11th day or the Ekadashi of the waxing phase of the Hindu month of Phalgun. This festival concerns the significance of Lord Vishnu, Goddesses Laxmi and Radha. It is believed that this is the day when they decided to reside near the Amalaki or the amla tree.

Lord Vishnu is recognized as the most powerful God of the Hindus. There are numerous mentions of Vishnu in the holy texts of the Hindus. Various special incidents of his life are celebrated as holy days for the people who believe in Hinduism. The activities of Vishnu are also regarded as holy, which become part of the respective festivals. It is believed that following the rituals and other regulations of the festivals brings health and health to the people who do so. Lord Vishnu appears to the followers in different forms and Avatars. According to the beliefs, worshipping of the Lord leads to various positive outcomes of life. It is also considered that Vishnu provides justice to all, and liberates the devotees who deserve the same. This liberation is called Moksha, which brings salvation to the deserving devotees from the real world. The depiction of Vishnu includes having a divine shade of blue on his skin. He is also depicted as having four hands.

Not just the holy texts of the Hindus, there are various sculptures as well. These sculptures depict different forms and Avatars of the Lord. And not just the Lord himself, the other Gods and Goddesses related to Vishnu are also seen in the sculptures involved in various activities. These sculptures depict various remarkable and holy incidents or deeds by Vishnu and other Hindu Gods and Goddesses. Vishnu’s relations with other Hindu deities also deserve special mentions as far as the culture and belief of Hinduism is concerned.

Celebrating Amalaki Ekadashi
The celebration of Amalaki Ekadashi involves various kinds of the rituals and the programs, which are strictly followed by the Hindus. Not just reading and understanding the holy lines, but also sporting different holy products related to Lord Vishnu and other deities are to be noted. Even, worshipping the statues in different ways are also chief parts of the celebration. The true believers of Hinduism strictly maintain all kinds of rituals, and observe the last day of Rang Panchami with massive zeal.