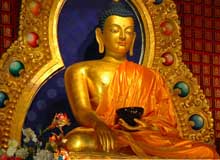 Baisakh Buddha Purnima is the festival, which falls on the full moon day (Purnima). This auspicious day is also known as Vesak buddha purnima as it falls in the month of April or May. This festival is celebrated not only in India but also celebrated in other parts of the country as there are many supporters as well as admirers of Lord Buddha. The Baisakh Buddha Purnima day is marked with prayer meets, religious discourses, recitation of Buddhist scriptures, worship of the statue of Gautama Buddha and group meditation.

It is believed that Buddha achieved Enlightenment and passed away on the Baisakh Purnima i.e. same day. Baisakh Buddha Purnima is also known as Buddha Jayanti, Vaishaka, Vesak and Buddha’s Birthday. Baisakh Buddha Purnima is celebrated as the birth anniversary of Gautama Buddha. His birth name was Siddhartha Gautama. Buddha was a great spiritual teacher on whose teachings Buddhism was actually founded.

The time of birth and death of Gautama Buddha is not certain. However, as per historians his lifetime was between 563-483 B.C. Historians consider Lumbini (located in Nepal) as the birth place of Gautama Buddha. He died at Kushinagar, Uttar Pradesh at the age of 80. For disciples and Buddhists, Bodh Gaya is the important historical site related to the life of Buddha. The other important pilgrimage site is Sarnath. It is believed that Gautama Buddha obtained Enlightenment at Bodhagaya and he first taught the Dharma at Sarnath.