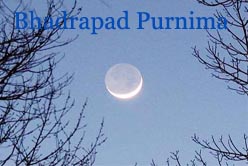 The month of Bhadrapada, is considered extremely auspicious and significant in the Hindu culture and is generally dedicated to Lord Ganesha. However, Bhadrapada Purnima, which is celebrated on the full moon day of the month, is dedicated to Lord Satyanarayana. Although the festival is celebrated across the entire nation, it is observed especially with great devotion in the state of Gujrat.

In 2014, Bhadrapad Purnima will be celebrated on 9th September.

The Rituals Associated With Bhadrapada Purnima
One of the most important aspects of celebrating Bhadrapada Purnima is worshipping Lord Satyanarayan, who is considered to be a form of Lord Vishnu. People worship the deity by offering edible items like banana leaves, fruits, supari, til, pan, and decorative and pious things including moli, kumkum, roli, etc. They also offer panchamrit made by mixing honey, ganga jal,   milk, banana, sweets and tulsi.

It is common for people to observe a fast on this day and break it in the evening by eating prasada made by roasting a mixture of sugar and wheat. However, before eating the Prasad, devotees are required to narrate the story or katha of Lord Satyanarayan and then worship him along with Lord Shiva, Goddess Laxmi and Lord Brahma.

It is also customary for people observing the fast to donate food and clothes to Brahmins on this day. It is also considered auspicious to take bath in one of the various holy rivers flowing across the country as this is believed to appease Lord Vishnu, who then blesses the devotees to have a happy and prosperous life filled with contentment.

Celebration of Bhadrapada Purnima in Gujrat
Bhadrapada Purnima is one of the most important festivals celebrated in Gujrat and the day is dedicated to Goddess Ambaji. A grand fair is organized at the Ambaji temple, which is one of the fifty one Shaktipeeths of India. The fair is attended in large numbers by farmers from all parts of the state and they present various folk dances and performances to appease the Goddess.

It is believed that the temple Ambaji is located on the place where the heart of Goddess Sati fell after her body was dismembered by Lord Vishnu. The unique feature about the temple is that it does not have any idol of the goddess, but rather features a sign of a Shree, inscribed within a triangle. This form of Goddess Ambaji is also famous by the name of Vishwa Yantra.