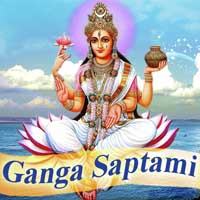 Ganga Saptami is an auspicious festival and is popularly known as ‘Ganga Pujan’ and ‘Ganga Jayanti’.Ganga Saptamifalls on the 7th day of the ShuklaPaksha (bright half) in Vaishakha month. It is celebrated in honour of Goddess Ganga.Maa Ganga is also called as ‘Jahnavi’ for being the daughter of Rishi Jahnu.

This pious festival is also named as Gangavataran; formed after conjunction of two words- Ganga and Avataran. Ganga means Goddess and Avataran means landing down. Therefore, it factually means – the origin of the Holy River Ganga.River Ganges is considered as the most sacred of all rivers in India. People also perform religious activities and take a holy dip on the banks of river Ganga.Ganga Aarti is also held at several Ghats of the Ganges.

Donations to be made on Ganga Saptami:

According to Hindu Legends, when the mighty Ganga was descended to the Earth, Lord Mahadev (Shiva) took her in his Jata (long tresses or hairs) to break the Ganga's descent so that Ganga does not sweep the complete world away. Later Lord Mahadev released Maa Ganga so that she can accomplish her mission to purge the cursed souls of Bhagiratha’s ancestors.

While on the way to Bhagiratha, her gushing turbulent water destroyed the Ashram of Rishi Jahnu. This angered Rishi Jahnu and he drank up all of Ganga's water. Upon this, Bhagiratha and other Deities requested to Rishi Jahnu to give her release so that she could proceed with her mission. Pleased with prayers Jahnu released Goddess Ganga from his ear.According to Hindu Mythology; Jahnu Rishi released her on Saptami(Seventh day) of VaishakhaShuklaPaksha (bright half of Hindu month Vaishakh).

Because of this legend ‘Ganga Jayanti’ or Ganga Saptami is also called as Jahnu Saptami. Ganga is also known as Jahnavi, the daughter of Rishi Jahnu.

Ganga Saptami is believed to provide the devotees with huge benefits. It is believed that all the previous and present sins are removed after taking a dip in the holy River Ganga on thisspecial occasion. Taking a holy bath purifiesthe souls and enables the devotees to lead a healthy and prosperous life (full of happiness). Taking bath in the sacred river in Ganga Saptami fills the worshipper with fresh energy that allow them to complete their duties on time.