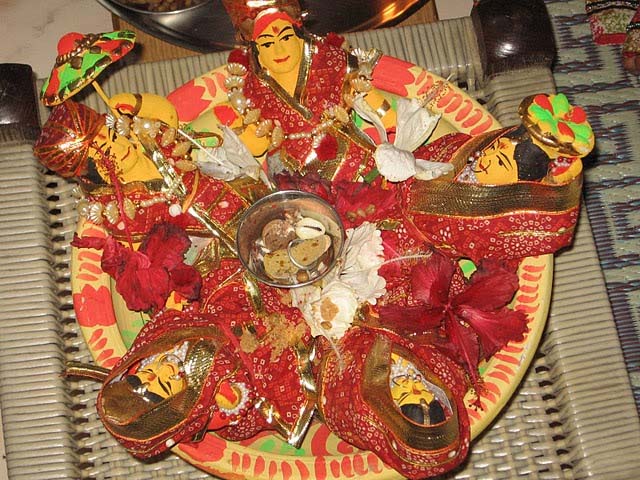 Gangaur is a festival celebrated in the Indian state of Rajasthan and some parts of Gujarat, West Bengal and Madhya Pradesh. Gangaur is colourful and one of the most important festivals of people of Rajasthan and is observed throughout the state with great fervour and devotion by womenfolk who worship Gauri, the consort of Lord Shiva during March–April. It is the celebration of spring, harvest and marital fidelity.

Gana is a synonym for Lord Shiva and Gaur which stands for Gauri or Parvati who symbolizes Saubhagya (marital bliss). The unmarried women worship her for being blessed with a good husband, while married women do so for the welfare, health and long life of their husbands and for a happy married life. People from Rajasthan when migrated to Kolkata in West Bengal started celebrating Gangaur. This celebration is now more than 100 years old in Kolkata.

Gangaur (गणगौर) is one of the most popular, colourful and important festival for people of Rajasthan  and it is observed throughout the state with great enthusiasm and devotion by womenfolk. The festival is the celebration of monsoon, harvest and martial fidelity. Women worship Gauri, the consort of Lord Shiva. The word ‘Gangaur’ is literally made up of two words, ‘Gana’ and ‘Gaur’. ‘Gana’ is synonymous with Lord Shiva and ‘Gaur’ which stands for Gauri or Parvati symbolizes Saubhagya (marital bliss). Gauri is the personification of excellence and marital love.

Lord Shiva and Goddess Parvati are worshiped in this festival of Gangaur. This festival is specifically meant for women folks. The unmarried women worship Gauri for blessing them with good husband, while married women do so for the welfare, health and longevity of their husbands and cheerful married life. Let us now know how to perform the Gangaur Puja and Vrat in detail. Gangaur is a very colourful and popular festival of Hindu that is celebrated with full enthusiasm and fervour in whole of India, especially in the state of Rajasthan. This festival is mainly observed by womenfolk for the wellbeing of husbands and marital bliss. Gangaur is observed on the first day of ‘Chaitra’ month, which is the day of ‘Holika Dahan’ and continues for the next 16 or 18 days. This corresponds to the months of March-April in the Gregorian calendar. The Gangaur Vrat and puja is dedicated to Lord Shiva and Goddess Parvati. It also commemorates the divine marriage of Lord Shiva and Parvati. Gangaur also marks the onset of harvest and monsoons; it is one of the most awaited events that is celebrated with immense pomp and show.

The word ‘Gana’ in Gangaur signifies Lord Shiva and ‘Gaur’ implies Gauri or Parvati. In Hindu mythology, Gauri is the personification of marital love and excellence. Hindu devotees, especially married women, worship Goddess Gauri during the festival of Gangaur for longevity and prosperity of their husbands. The festivities of Gangaur festival are very grand in the Indian state of Rajasthan. Colourful processions and fairs aptly describe this festival. The celebrations can also be witnessed in some parts of Madhya Pradesh, Gujarat and West Bengal. Gangaur is also popularly referred as ‘Gauri Tritiya’.

Gangaur and its rituals are very unique that holds immense significance for Hindu women, both married and unmarried. On this auspicious day womenfolk worship Lord Shiva and Goddess Parvati. The celebrations of Gangaur start just after Holi and continue for the next 16-18 days. Married women observe the Gangaur Vrat for long life and welfare of their husbands while unmarried keep this vrat to get their desired husbands. Moreover the festivities of Gangaur Vrat also signify the arrival of the awaited Spring Season.