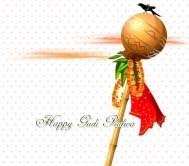 India is an agrarian society where agriculture is the foremost occupation. Gudi Padwa is the most important harvesting festival of India that symbolizes the end of one season and the beginning of a new one. Gudi Padava is also popular as many names such as Yugadi, Ugadi, Samvatsar Padvo, Cheti Chand or Navreh. This auspicious festival is also celebrated in the North-East state of Manipur as Sajibu Nongma Panba Cheiraoba. Manipuris prepare a variety of cuisines on this festival and later climb a nearby hillock in the evening.

This festival also marks the beginning of a new year in Andhra Pradesh, Maharashtra and parts of Karnataka. Gudi Padava festival is known as Ugadi in Karnataka and Andhra Pradesh and Gudi Padwa in Maharashtra. It has become a traditional custom to hold Kavi Sammelans (Poetry recitals) this day. Maharashtrian also makes Puran Poli or shrikhand and Poori on this day. Konkanis make Kanangachi Kheer, Kheer made of coconut milk, sweet potato, rice flour, jaggery, etc. and Sanna.

In the Southern part of India, bobbatlu, holige- a sweet stuffed bread, puligore- a sour tamarind rice dish and Ugadi Pachadi made of raw mango pieces, jagerry, tamarind and neem flowers is prepared. At this special event, they also decorate their houses with mango leaves, flowers and 'rangoli' designs, visit the temples and pray for a prosperous new year.

Legend says that Lord Brahma created the world on this auspicious festival and so Lord Brahma is worshipped especially at this time. Mythologically, this special festival too celebrates the defeat of Ravana in the hands of Lord Rama. This bright phase of the moon has special meaning from the astronomical point of view. The Sun is supposed to be in first point of Aries, which is a first Zodiac sign and is a natural beginning of spring. Gudi Padva is one of the four most favourable days in the year when anyone can start new ventures. Buying gold, new utensils, new vehicle or anything new is considered to bring prosperity, if done at this festival.