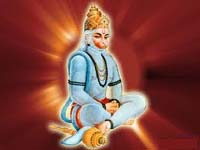 Hanuman Jayanti or Hanumat Jayanti is a Hindu festive celebration made in reverence of the birth of Lord Hanuman.

Lord Hanuman, the Vanra God (the lord of monkeys), is primarily known for his ardent devotedness for Lord Ram. According to beliefs in Hindu religion, he is one of the most famous incarnations of Lord Shiva. He was born to wind-god and Anjana Devi. There is a legend behind his birth. Lord Agni, the deity of fire, gave King Dashrath (the king of Ayodhya) a bowl full of divine dessert to distribute it amongst his wives so that they can have divine children. While doing so, an eagle snatched some part of that dessert and flied away. It dropped that part of dessert at the place where Anjana Devi was meditating, which Pavana (wind-god) delivered down to her outstretched hands. Anjana consumed that divine dessert and later she gave birth to Hanuman.

Lord Hanuman is referred with several popular names, such as Pavanasuta, Pavankumar, Anjanisut, Anjaneya, Maruti, Vajrang, Marutsuta, Bajrangbali, and Mahavir. He is considered as the most perfect manifestation of courage, strength, energy, and perseverance in Hindu religion. Worshipping him derives one with the same virtues. Such is his power and strength that he can willingly modulate himself into any form. Several legends indicating his immense strength and courage can be referred out of Ramayana. He is also believed to be the master of magical powers, with which all sorts of evil energies can be conquered upon.

There is an intense sense of devotedness settled in profoundly in the hearts of his followers. In India, people either worship him alone or as along with Lord Ram. For the fact, you’ll not find any Lord Ram’s statue without Lord Hanuman in it

1. On Hanuman Jayanti, devotees observe fast, read Hanuman Chalisa, and recite Ram-Nam. All those who choose to do the same with utter devotion get conferred with the blessings of Lord Hanuman and attain immense success in all their endeavours of life.

2. Lord Hanuman was born at the time of sunrise. Therefore, religious discourses adoring Lord Hanuman start echoing in houses and temples from the early hours of the day at dawn. They are concluded at sunrise. After that, food is offered to Lord and later, it is distributed amongst all the devotees as Prasad.

3. There is a certain way with which Lord Hanuman is meant to be worshipped. On the very auspicious day of Hanuman Jayanti, it is an act of extreme virtue for his devotees to worship him. Therefore, while doing it, one should abide by certain rituals as stated be to extremely important.

4. Applying of Sindur on forehead is one amongst them. There is a popular legend associated to it. Once, Mata Sita was applying Sindur to her head. Lord Hanuman who was seeing the same asked her the reason. She said that is it is for the purpose of ensuring longevity of her husband, Lord Ram. Influenced by that, Lord Hanuman smeared his entire body with Sindur in order to make Lord Ram ever-enduring. At the time of worshipping him, the first and foremost thing that every devotee ensures to do is to apply Sindur as taken from the body of idol of Hanuman over his forehead using his ring finger.

5. Offering fresh flowers and leaves of ruee tree to deity is another important ritual. It should always be offered in a group of five or in any number which is a multiple of five. Also, the stems should be purposefully placed in direction of deity.

6. Two incense sticks of Kewda, Chameli, or Amber should be waived in front of the idol for three times in complete circle in a clockwise direction. It should be hold in between the index finger and thumb of the right hand.

7. Other than that, walking around the idol for five times, breaking a coconut in front of him, and offering oil to the idol are some other important rituals to be performed on the day.