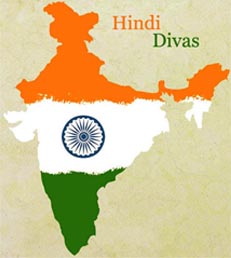 Hindi Divas
As is evident from its name, Hindi Divas is celebrated to uphold the importance of Hindi as the national language of India. The celebration of Hindi divas was initiated in 1949 after the constituent Assembly of India adopted Hindi as the official language of the nation. The day is celebrated annually on 14th September, to mark the anniversary of this historic decision.

The Hindi language has basically been derived from Sanskrit, even though it also contains many words from the Persian language.  It is a little known fact that the language was further enriched by the Mughals who added various Arabic words and terms to the language.

Significance of Hindi Divas
In the modern times, when English has become the most popular language for communication in India, most Hindi lovers feel that celebrating Hindi Divas is a way of maintaining the integrity of this language. They also believe that through the by celebrating this day, the younger generation can be made aware of the richness of this language and that they can be motivated to use it frequently in their everyday communication.

Hindi is often described as the language of unity and harmony primary because it contains words and phrases derived from two most popular languages spoken by our ancestors. Many people believe that celebrating Hindi divas stresses on the importance of the language as a link between two major world communities. In addition, it provides a platform for Hindi lovers across the world to share their feelings and experiences about the language.

Celebration of Hindi Divas
The celebration of Hindi Divas generally begins with special prayers being offered to Goddess Saraswati and Lord Ganesha in numerous educational institutions, government departments and even some private organizations across the nation. Later during the day several functions are organized to stress the importance of Hindi. These include, essay writing and poetry competitions, debates, speeches and other such activities.

It is also quite common for Hindi lovers to organize kavi sammelans in the evening, where renowned Hindi poets are invited to recite their works and educate people about the significance of the language. In many schools, colleges and government offices, it is mandatory to communicate only in Hindi on this day. In some parts of the country, award ceremonies to felicitate the people who have made significant contributions towards the development of the language are also organized. However, such functions are generally held at local levels only.