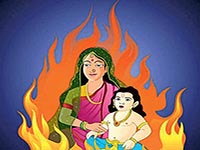 The word Holastaka or Holashtak is made up of two words ‘Holi’ and ‘Ashtak’, the word 'ashtak' meaning 'eight' indiacted eight days before the Holi Festival. As per the Hindu Calender, Holashtak begins on the 8th day (astami tithi) during the waxing phase of moon in Phalgun month to Holika Dahan that ends on the full moon day ( Falgun Purnima day). For many communities, Holashtaka, the period of eight days is considered as inauspicious, and people starts this whole period with the decoration of the branch of a tree with colorful pieces of clothes. Everyone ties a piece of colorful cloth and in the end this is buried underground.

Holastak period is considered very important for Tantriks as this time is the most favourable period to achieve goals through Saadhna. They gain special powers during this period which can be used in most pecular ways. Interestingly, after achieving special powers in this period, Tantriks propitiate the Gods and other cosmic powers with full strength. This phase is followed by the Hoilika Dahan and celebration with rang (colors). The place where Holika Dahan has to be performed is cleaned with Holy water (Ganga Jal). Then pyre is created particularly with a collection of wood. The ashes left over after the Holika Dahan is performed is considered very favourable. People also collect it and store it for using it on the forehead as tilak.

There is also an ancient Puranik story relating to Holastaka that on day one, Lord Mahadev (Shiva) burnt the Kaam dev with his fire of anger. Puranik stories also say that on the Holika Dahan, the demon Holika was burnt as she was trying to kill Prahlad who was a devotee of Lord Vishnu. The period of eight days of Holashtaka is also considered as an ideal period for doing ‘Daan’ or Donations or offerings. During this period one must donate money, clothes, and other essential commodities. As the colors of Holi, the style of celebration is also diverse in different regions of India. Holi is celebrated in different ways in Haryana, Goa, Rajasthan, Punjab, Uttar Pradesh, Tamil Nadu, Gujarat, Orissa, Maharashtra, etc.

It is belived that during the period of Holashtak; Sun, Moon, Mercury, Venus, Saturn, Jupiter, Mars, and Rahu undergo changes on eighth, ninth, tenth, eleventh, twelfth, thirteenth, fourteenth, and fifteenth day of bright fortnight of falgun month. Because of these changes, this particular period is not considered favorable. It is also considered inauspicious to perform or participate in any auspicious ritual during this period e.g. housewarming, marriage, or any divine ritual (sanskars). Persons of some community also avoid starting of new business deals or projects, etc.

Enjoy the festival of colour to the fullest by keeping in mind the significance of Holashtaka.