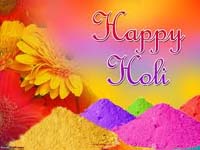 Holi, the colourful Hindu festival, is one grand celebration of the year which everyone eagerly waits for. It is a spring festival, known with several names across several boundaries. It is most prominently known as the ‘Festival of Colours’, besides known as Phagwah, Basantotsav, and Dol Jatra.

Significance
It holds enormous degree of prominence out of the legends associated with it. However, the mere aspects of fun, cheer, and pleasure intrinsic to this festival contribute to its immense popularity not only amongst the followers of Hindu religion or people of India, but also amongst those who do not actually belong to them. If needed to be confined within few words, it can be best described as the festival of celebration of life. It is a mark initiating and welcoming the spring, a season which best represents hope and joy.

With Holi, there are few different legends associated. Here are some of the most prominent ones:

1. The Legend of Hiranyakashipu: It is believed by many to be celebrated in commemoration of the death of Holika, sister of Hiranyakashipu who was a famous demon king. The demon king received a boon by Lord Brahma which made it almost impossible to make him meet death. That made him arrogant, out of which he started attacking heavens and Earth. He stopped people from worshipping Gods, and forced them to rather worship him. However, his own son Prahlada grew up to be an adamant devotee of Lord Vishnu, remaining unperturbed by what his father had to say.

Out of that unfaithfulness towards him, Hiranyakashipu got enraged enough to put in several tricks to get his son killed, but all tricks failed. At last, he asked his sister Holika, who had a boon of remaining unaffected by fire, to make Prahlada burn by making him sit on her lap while she would be sitting on a pyre. Holika did the same. Meanwhile, Prahlada remained intact with his devotion towards Lord Vishnu. As soon as they were made to sit on pyre, Holika got burned while Prahlada remained untouched by flames. Since then, the day has been celebrated as Holi. It celebrates the spirit of ‘good triumph over bad’.

2. The Legend of Kamadeva: In the beliefs of Hindu religion, Lord Kamadeva has been described as the Lord of love. Once, out of his purpose to help out Parvati in winning Lord Shiva’s heart, he fired his weapon at Lord Shiva while he was engaged in meditation. Undesirably influenced by that weapon, Lord Shiva opened his third eye. Lord Kamadeva suffered his wrath and turned into ashes. Later, Lord Shiva restored him but only as a mental image on insistence of Rati, wife of Lord Kamadeva. It was believed to be the representation of the essence of emotional and spiritual state of love, and demeaning the essence as given to physical lust. Holi is celebrated in commemoration of the same. This legend is more prominent in South India.

3. Lord Krishna Connection: During his days in Mathura, Lord Krishna used to have a 16-days long celebration of this festival till the day of Rangpanchmi. It commemorates for the eternal love of Radha and Krishna. Lord used to apply her with colours in order to ward off all differences and make her look like him.

Another Krishna connection is that with Pootana, a female demon. When Krishna was still in his infant age, she tried to kill him on command of Kansa (Krishna’s devil uncle) by feeding him poisonous milk. However, while trying the same, Lord Krishna sucked all her blood and killed her. For many, Pootana represents for winters, and celebration of Holi for her death is a representation of end of winters.

The grandest celebrations of Holi take places in Braj region of Uttar Pradesh in India, which in one single breath are referred as ‘Braj ki Holi’. Also, other neighbouring areas of Mathura, Vrindavan, Barsana, and Nandagaon are equally prominent with their festivities during this time. Though, it is actually a one day festival, but these places remain profoundly engaged in celebrations for as long as a week’s time. Thousands of devotees not only from within the country, but also from outside India, visit this place during Holi time to be a part of the truly-unique ways of celebrating it and to experience the true essence as hold by it.

1. Holi celebrations began a day before the celebration day. On the Holi eve, people gather up in communities for Holika Dahan. It is also referred as ‘Choti Holi’ (Small Holi). As a part of the same, a large community bonfire is set up at crossroads. People from the community gather at that place to perform rituals. Showing their respect to Lord Agni (fire), grams and stalks from the harvest are offered in fire. In the end, the leftover ash is collected in small amount, and is applied across forehead. Doing so is believed to ensure protection from evil energies.

2. Colour primarily represents this festival. While some people spread these colours of love amidst their friends and families, some move out to be more social with their celebrations, wishing everyone ‘Happy Holi’. Small children climb up their rooftops, play with their water guns (pichkaari), and throw water balloons over those passing by. Gulal and Abeer are the colours, what all prefer to play with.

3. The festival also represents for reunion. It is a time when people forget and forgot all conflicts of the past to move on in life with a smile. All it takes to make up and move on is a hearty hug and some colours on face.

4. Women make special food arrangements for the day. Gujiya, Mathri, and Papri, besides potato chips and papad are some essential food items to be consumed and served on the day.

5. Singing and dancing is another important part of celebration. People in small groups bring in the dholak, and sing traditional Holi sings, while drinking Bhaang (an intoxicating drink made up of milk) and consuming Gujiya and papad.