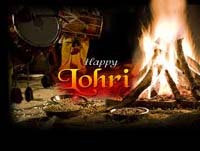 The festival of Lohri is extremely prominent amongst Punjabis. Its real essence and significance can be felt in North India, and more precisely in the regions of Punjab, Haryana, Delhi, Himachal Pradesh, and Jammu.

Basically a bonfire festival, Lohri commemorates for the harvesting of Rabi crops (winter crops). These are sown during the month of October and harvested during the months of March or April. In January, when farmers are preparing themselves for harvesting the crops, they celebrate this festival with extreme pleasure and fervor. Punjabis are known for their fervent and jovial nature, and that gets pretty reflected in the way they celebrate their festivals. Lohri is one occasion truly reflects on the same.

Besides this aspect of significance, there are few other factors which contribute to its essence. The time when it is celebrated is a mark of point of fading off of winters. The coldest month of Paush ends, the month of Magh initiates, and the auspicious period of Uttarayan gets started. As stated in Bhagawad Gita, it is at this time of the year when Lord Krishna manifests himself in his full magnificence.  All this adds up to its significance.

It is celebrated during the days when the region is passing through the yearly phase of extreme cold weather. However, the extreme cold weather conditions certainly do not hold back anyone to be a part of its celebration, which is high on aspects of joy, enthusiasm, and energy. Traditionally, this festival was used to be celebrated on winter solstice. However, at present, it is instead celebrated on the last day of that month in which winter solstice takes place. According to Georgian calendar, it falls in the month of January.

The very first Lohri as celebrated after a marriage or birth of a newborn gets extremely important. The festival as well as the way it is celebrated becomes grander than ever.

Besides Punjabis, Hindus see it as one extremely auspicious opportunity when they can get rid of all their sins by taking a bath in the sacred Ganges. This is performed on the very next day, which is referred as ‘Maghi’, or the day marking the beginning of the month of Magh. Also, sweets dishes (usually Kheer) are prepared to mark the auspiciousness of the day.