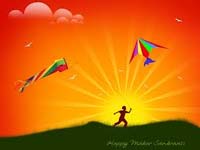 Scientifically, when Sun moves from Tropic of Cancer to Tropic of Capricorn, it is observed. Astrologically, when Sun moves from Dakshinayana to Uttarayana in the month of Poush, it is observed. According to Georgian calendar, it falls on the 14th of January, every year. This makes it one of the very few Hindu festivals which have one static date of observation in Georgian calendar.

The belief as stated above is somewhat traditional. In more general terms, this festival marks one of the many important harvest days of the year, with this one being one very important of all those. Precisely, it is a mark of the beginning of harvest days or spring season. From this day, days start getting longer and nights start getting shorter. It also represents for the ‘holy phase of transition’. It also marks an end to the inauspicious period which comes in presence from around mid-December. According to beliefs in Hinduism, it is one point of difference of time after which all sorts of auspicious practices or rituals can be performed.

Beliefs around This Day

1. It is on this day that Sun visits his son Shani (Lord of Makar). Though, they are not considered to be too cordial otherwise, but in spite of that, Sun makes sure to make a visit to Shani to meet him.

2. It is on this day that Lord Vishnu killed Asuras (demons) and buried their heads under Mandar Parvat.

India is as vast with its land as it is with its cultures and diversities. Owing to the same, this festival is celebrated in wide and varied forms. As one chooses to transit from one culture to another or one agriculture environment to another, one will sense a thick change in the way this festival is observed and celebrated. Other than that, different places call it with different names. For instance, it is ‘Uttarayan’ in Gujarat and Rajasthan, ‘Pongal’ in Tamil Nadu, ‘Magh Bihu’ or ‘Bhogali Bihu’ in Assam valley, ‘Khichdi’ in Uttar Pradesh, ‘Maghi’ in Haryana, Himachal Pradesh, and Punjab, and so on.

It is an extremely significance festival, which one can sketched out of the fact that it holds a mentioning in Mahabharata, one of the greatest epics of all time. Accepting and adorning that significance, grand celebrations take place all over the country to mark the arrival of the very auspicious festival of Makar Sankranti. As already stated, different places with different cultural and agricultural backgrounds celebrate it differently. However, one common aspect of all those distinctive celebrations is the presence of immense joy, faith, and fervour. Here is an overview of the prominent ways with which this festival is celebrated.