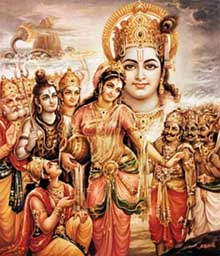 Mohini Ekadashi is observed during the Shukla Paksha (bright fortnight) on the Ekadashi (11th day) of Vaisakha month (Hindu month). Mohini Ekadashi falls during the months of April-May and is celebrated all over India by Hindus.

Mohini Ekadashi fasting is dedicated to Lord Vishnu. This day is celebrated by all Hinduism devotees as it helps in washing away all the sins committed by the people.

In Indian mythology, Mohini is the name given to the disguised form of Vishnu Deva (Lord Vishnu) and ashe appeared in this form on the Ekadashi tithi, we celebrate this day as ‘Mohini Ekadashi’.This Ekadashi is celebrated in Northern India in the ‘Vaisakha’ month, however,in Tamil calendar; it falls during ‘Chithirai’ month, according to the Bengali Calendar it falls in the ‘Jyestho’ month and in the Malayalam calendar this festival falls during the month of ‘Edava’. Hindu devotees observe Mohini Ekadashi festival to seek divine blessings for living a peaceful, happy, successful and prosperous life.

The importance of Mohini Ekadashi Vrat/ Fast was described by Krishna to Yudhisthir when Yudhishthir questioned about the importance of Ekadashi. It is said that this Fast was even performed in Treta Yug by Lord Ram, when he was unable to bear the separation from Maa Janaki/ Sita. Lord Sri Ram was advised by sage Vasistha to perform this Fast (Vrat). After Ramji followed this ritual of Fasting, he overcame all the obstacles and brought back Mata Sita after killing Ravana.

Rituals associated with the day of Mohini Ekadashi:

Fasting (Vrat) on this event is believed to wipe out all sins (present & previous) and help in leading a happy life. Plus, an individual undergoing sadness and depression is effectively able to overcome this condition. Devotees even believe that following the ritual of fasting on Mohini Ekadashi is more fruitful than performing spiritual baths in the rivers.

So, dedicate the day of Mohini Ekadashi to Lord Vishnu and wipe out all your past life misdeeds. Follow the ritual of worshipping Lord Vishnu devotedly and you will be blessed with salvation (Moksha).

Most of the people prefer to go for Maha Vishnu Yagya on this special occasion. In order to please Lord Vishnu through Homam/ Vedic Yagya. Want to know about this Yagya? CLICK the following link: