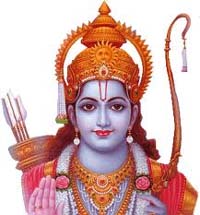 Ram Navami or Sri Ram Navami is a Hindu festival which celebrates the birth of Lord Ram.

About Lord Ram
Lord Ram or Ramachandra is one of the most admired deities in Hindu religion. Lord Ram was born in the house of King Dasharatha from his wife Kausalya in the reigns of Ayodha. According to prominent beliefs, he is the seventh incarnation of Lord Vishnu. He is popularly referred as ‘Maryada Purushotam Ram’, which defines him to be the perfect man of dignity and principles. He later got married to Mata Sita. Lord is prominently known for his battle with Ravana, the demon king and king of Lanka, who abducted Mata Sita while they were under their period of banishment of fourteen years.

Time of Celebration
According to Hindu calendar, Ram Navami is celebrated on the ninth day (Navami) of the month of Chaitra. It falls at the end of the nine-day celebrations of Navratri of the Chaitra month. According to Georgian calendar, it falls either in the month of March or April.

Major Celebrations
With Ayodha being the birthplace of Lord Ram, one can anticipate and experience the grandest of celebrations in this place. One can sense a thick line of difference in the way celebrations are staged in Ayodha with rest of the world. One can’t really afford to miss all that enthusiasm and devotion which go in to bring out the ultimate big festive picture. Pondicherry is another place which has been associated with some very prominent events of the life of Lord Ram. Devotees in large numbers also make a visit to this place.

Rituals and Celebrations
On Ram Navami, worshipping in adoration of Lord can be merely done by devotedly chanting his name, and that is what one should prefer to abide by.  However, there are certain rituals and conventional ways of celebrations which have been stated to be as important as chanting Lord’s name. Read on.

1. As Ram Navami immediately follows the nine-day long festive period of Navratris, the environment all around on the day is all filled with devotion. Temples across the country perform different rituals all throughout the day to mark the sacredness of occasion. Some Ram temples carry out a prolonged nine days celebration, starting from Gudi Padwa (the very first day of the month of Chaitra) till the day of Ram Navami.

2. Early morning prayers to Lord Sun, precepts from Ramcharitra Manas, spiritual discourses, embellishment of Ram Darbar, different processions through the streets, and devotees singing devotional songs and dancing to its tunes everyone engaged. Many people observe an entire-day fast. Amongst this activeness, street procession is something which everyone eagerly awaits for. People dressed up as Lord Ram, Mata Sita, Laxman, and Lord Hanuman travel around in streets over a beautifully decorated chariot.

3. There is a ritual performed on the noon of the festival day. A coconut covered around with cloth is placed in a cradle, and then that cradle is rocked back and forth. Meanwhile, all the devotees shower upon flowers and gulal (perfumed dry colour) over it. This represents for the birth of Lord Ram and the devotees cradling him as an infant. It is done in the noon time because Ram supposedly took birth during that time of the day.

4. Devotees in several thousands in numbers arrive on the banks of the sacred river Sarayu to take a holy dip on this day, as doing so is considered as extremely auspicious.